It could be one of the weirdest monument ever.

To celebrate Detroit's 200th birthday, it was decided to build ... a giant stone chair.

To mark Detroit's bicentennial, city officials planned to erect a 220-foot marble column on Belle Isle with a natural-gas light at the top. It was to be 24 feet wide and be decorated with statues of icons in Detroit history. The price tag? About $1 million. Some things never change, and public opposition to the frivolous use of tax dollars is one of them, so the city opted to go with a cheaper option: a large, red sandstone chair.

The Cadillac Chair was erected July 24, 1901 -- on the 200th anniversary of the city's founding -- at the western end of Cadillac Square, just east of the Soldiers and Sailors Monument in Campus Martius. The $1,500 monument (about $38,000 today) featured the seal of Cadillac, and an inscription on its back told of Cadillac’s arrival:

“This chair, erected July 24, 1901, is located on the site of the City Hall built in 1835 and occupied until 1871 as the seat of Civic Authority. “It is symbolic of the Seigneurial Rule of Antoine de la Mothe Cadillac, Knight of St. Louis, who, with his company of colonists, arrived at Detroit, July 24, 1701. “On that day, under the patronage of Louis XIV, and protected by the Flag of France, the City of Detroit, then called Fort Ponchartrain, was founded.”

City leaders hailed it as an important marker of Detroit history, a true testament to how grand the city was, something that would stand for ages and tell future generations of the city's heritage. But it wouldn’t last ages. In fact, it lasted only 40 years.

By the late 1930s, the limestone had started to fall apart, and the chair had turned into a favorite resting spot for vagrants and drunks. In this Detroit, that would not be tolerated. On Nov. 1, 1941, workers showed up with sledgehammers and it was removed in pieces.

So where is it now? News reports at the time said it was to be taken to the art institute, but the Detroit Institute of Arts has no record of the chair in its collection, and a 1972 search for the monument didn't turn up a crumb. If the limestone chunks were saved, they could have disintegrated. However, judging by how the chair was dismantled, it seems unlikely that the chair was saved. One Detroit Free Press staffer wrote of the dismantling that “these workers apparently are wrecking the ancient fixture.” 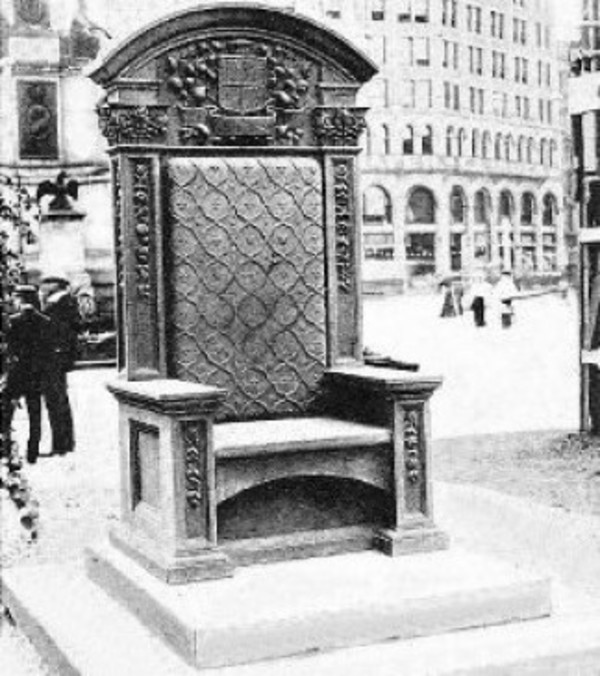