This article was originally published in the Detroit Marine Historian, published by the Marine Historical Society of Detroit, which has been recording the history of the Great Lakes since 1944. The society's website is at www.mhsd.org. It is reproduced here with permission.

The minutes of the annual meeting of the shareholders of the Detroit, Windsor & Belle Isle Ferry Co., held on May 1, 1905, contain the following:

“To keep pace with the growth of the city and a large increase in our Belle Isle passengers, the president recommends the erection of a new boat to be built according to plans submitted at stockholders' meeting. The new steamer to be 38 feet longer than the Steamer Pleasure and 38 feet shorter than the Columbia, the boat to be a general purpose boat suitable for Bois Blanc, Belle Isle, excursions and to be a powerful ice crusher and could be used on the Windsor ferry in case of very severe weather.”

The ferry company’s Board of Directors met Jan. 8, 1906, and approved a contract with the Detroit Shipbuilding Corp. for the construction of a new steamer to plans prepared by Frank E. Kirby. The cost of the vessel was given as $132,500. Construction of the steamer’s steel hull (the shipbuilder’s No. 166) proceeded immediately at the shipbuilder’s Wyandotte, Mich., yard.

On April 13, 1906, the Detroit Free Press reported that as a result of a public competition, the steamer would be named Britannia. The person who suggested the name was rewarded with "$10 in gold and a season’s pass on the company’s steamers.”

Britannia was launched Tuesday, May 15, 1906; her sponsor was Crystal Campbell, daughter of Walter E. Campbell, president and general manager of the ferry company. Immediately after the launch, the empty hull was towed to the Orleans Street yard of Detroit Shipbuilding in Detroit for installation of engines and boilers and the construction of the wooden superstructure. Completion was promised for June 30. It appears that date was missed by a day or two, as trials in Lake Erie took place on July 2, and the vessel entered service with a trip to Bois Blanc (Bob-Lo) on July 4.

The new steamer was 164 feet long and had a breadth of hull of 45 feet. She measured 791 gross tons and 401 net tons. She was powered by a triple-expansion engine by the shipbuilder, having bores of 20 inches, 32 inches and 50 inches and a stroke of 36 inches, with steam provided by a pair of Scotch boilers 13.3 feet by 12 feet; the power plant was rated at 1,400 indicated horsepower. In appearance and layout, she was a near duplicate of the Columbia of 1902, excepting only her smaller size and the extension of the boat deck to the stern.

As stated in the president’s report of 1905, Britannia was intended as an all-purpose vessel, for use mostly to Belle Isle and Bois Blanc. As her main deck was not intended for vehicles, use on the cross-river ferry would be limited. However, as noted, she was to be a “powerful ice crusher,” and she might be used on the ferry “in case of very severe weather,” which, perhaps, means difficult ice conditions. The ferry company had for many years made money using the ferries in winter to break ice under contract, and clearly Britannia was to provide a new, larger and more powerful unit for this purpose. A pair of photos in the author’s collection confirm that the vessel did, indeed break ice. One shows a man standing on Britannia’s bridge wing in heavy outer clothing and is marked on the back, "Britannia on Lake Erie, Dec., 1917 breaking ice for grain fleet.” The other shows the side of Britannia in ice and is captioned, “Britannia breaking through heavy windrow of ice on St. Clair River at Cherry Beach. Dec. 1917.”

In 1911, the corporate existence of the Detroit, Belle Isle & Windsor Ferry Co. was terminated and all its assets transferred to the newly incorporated Detroit & Windsor Ferry Co. The absence of Belle Isle from the title of the new company is significant, for that business was in decline. There had been a bridge to the island since 1889; by 1911 it appears that improved public transit and the advent of the personal automobile had reduced the ferry’s importance.

In 1915, the bridge burned and the ferry likely got a new lease on life, but with the opening of the new bridge in 1923, patronage declined again. The ferry company discontinued the service in 1928 and the City of Detroit operated it for one season, in 1929, before the line passed into history.

Britannia’s history suggests that the attempt to build an all-purpose boat was a failure. Only four years after she was built, the company required a bigger steamer for Bob-Lo and built the Ste Claire. One suspects that Britannia was too big for the Belle Isle service and too small for Bob-Lo.

In 1924, she was greatly altered for use on the cross-river ferry service. Her upper deck was removed and the forward portion of the promenade deck raised, along with the main cabin, in order to provide headroom for taller vehicles. The rest rooms and cabins along the sides of the main deck were removed to provide more vehicle space. Her tonnage figures changed to 579 gross and 256 net. In this form she probably copied the LaSalle, which was built for the ferry company in 1922. Perhaps Britannia’s narrower hull was a disadvantage, for the company built a running mate for LaSalle in 1928, naming her Cadillac. After Cadillac’s arrival, Britannia appears to have been relegated to spare-boat status.

Of course, this creation of a modern three-boat ferry fleet in the 1920s was completed just in time for the opening of the Ambassador Bridge in 1929 and the Detroit-Windsor Tunnel in 1930. The ferries soldiered on, but the writing was on the wall and the ferry service was discontinued on July 18, 1938.

After some years idle, Britannia was sold in 1943 to the Consolidated Water Power & Paper Co. of Wisconsin Rapids, Wis. She was converted to a tug by Purvis & Foster of Detroit, with tonnage after conversion of 705 gross and 479 net; it was at this time that part of her superstructure, including the main cabin, was taken ashore and used as part of a house on the river in Wyandotte.

Consolidated used Britannia to tow log rafts on Lake Superior. In 1952, she was sold to T.J. McCarthy of Detroit; information on what use McCarthy might have made of her would be welcome. In August 1961, Britannia, at the end of three careers, was sold to Duluth Iron & Metal Co. and scrapped at Duluth, Minn. 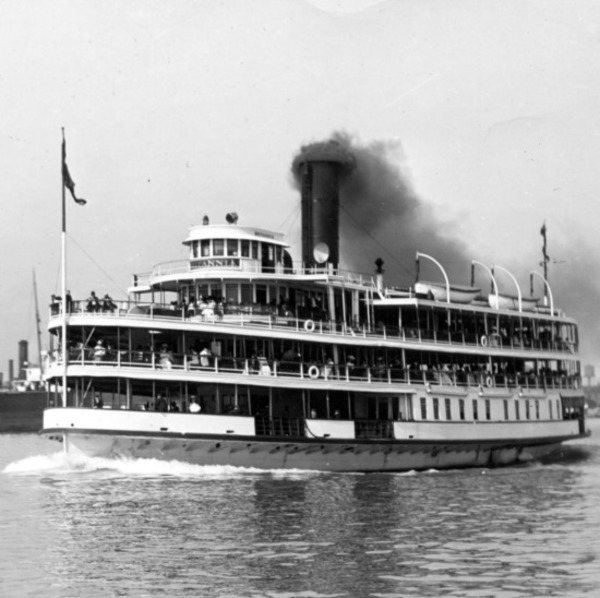