By Eric Becker for HistoricDetroit.org

Did you know William E. Boeing, the founder of the Boeing Co., one of America’s most successful aerospace companies, was born in Detroit? And if that weren't enough, his father, Wilhelm Boeing, owned one of Woodward’s most impressive mansions.

Next to the mansion built by C.R. Mabley of department store fame, William’s father, Wilhelm Boeing, had Henry T. Bush construct a Second Empire and Beaux Arts home so ornate, it was as if he had it shipped in from Europe. The home, at what was then 1189 Woodward Ave., stood between Ferry Street and Holden Street (later renamed Palmer Avenue). The Boeing mansion stood across from the Col. Frank J. Hecker House and adjacent to the Beecher House, and was built in 1875 at the edge of what was then called The Boulevard. The Boulevard was the place to live in the late 19th century, reserved for Detroit’s most wealthy citizens.

This palace of a house stood three full stories tall with an equally impressive two-story carriage house. The mansion featured a four-story tower topped by an elegant dome capped by a commanding finial. The tower continued into the slate-patterned mansard roof, where it was flanked by Corinthian columns and voluptuous baroque crowning. The house featured an incredible stone facade spanning all the way down to the immense yard, where the founder of the Boeing Co. surely pretended to fly.

Wilhelm Böing, who anglicized his name to Boeing, arrived in Detroit in 1868 at age 20. The son of a well-to-do German family, Boeing was seeking adventure and a new life abroad. He found work in the hard life of a farm laborer but soon teamed up with Karl Ortmann, a lumberman and his future father-in-law.

Wilhelm Boeing bought land along the Mesabi Range in the Northland of Minnesota with mineral rights, including land now occupied by the City of Duluth, over which Wilhelm Boeing had a bitter dispute over rights to a canal built by the city. According to local legend, Boeing was said to have had erected chains across the canal in Duluth, only for steamers and tugs to ram them down, time after time. This went on for a while until the dispute reached all the way to Congress. In addition to his land in Minnesota, Boeing bought land in Ocean Shores in Washington state and the Redwood forests of California.

In civic life, Boeing became the director of the Peoples Savings Bank and president of Galvin Brass and Iron Works. In Minnesota, he unknowingly bought land filled with a low-grade iron ore called taconite. Though Wilhelm Boeing died of influenza in 1890 at age 42 and did not live to see it mined, the land would provide his widow, Marie, and his three children - Gretchen, Caroline, and William - with plenty of wealth.

In 1898, Marie Boeing sold the Woodward mansion to Michael J. and Eliza G. Murphy for $26,000 (about $700,000 today, when adjusted for inflation). Marie later remarried as Marie Owsley, and upon her death in 1910, left $1 million to her son William E. Boeing, who would go on to establish the aerospace giant known around the world today.

The Murphys continued to maintain the Boeing home as the palace it was, staffed complete with its own full-time butler, cook, two maids, and weekly laundress. Michael J. Murphy was the founder of the Murphy Chair Co., then the world’s largest producer of chairs. According to the Detroit Free Press, the firm made 123 types of them at its factory on Harper Avenue at Lake Shore and the Michigan South Railroad Crossing.

In 1907, the Free Press called Murphy “a quiet man (but) strong." There can be no doubt that Murphy had the entirety of his newly acquired palace outfitted in only the finest of his own furniture. Murphy’s son, Gleeson Murphy, was coach of Cornell University’s baseball team. But all was not bright and cheerful for Murphy. In 1907, he and four other wealthy Detroiters had to pay a poor miner in Canada $100,000 each (a total of $500,000 or about $11.5 million today) for misrepresenting the value of mining equipment. But by 1905, Mr. Murphy had already done away with his impressive Woodward estate, selling it to investors the Rev. J Doherty, W. E. Roney and P. J. Hally for $35,000 (around $840,000 today). The men divided the palace into The Davis Apartments.

By 1910, the neighboring C.R. Mabley mansion had already met its demise, and the Boeing mansion was next in line. What replaced it was the automobile. At a time when service centers were in great need and the city was desperate for space to expand industry, such was a common story with the downfall for The Boulevard’s great mansions. The home's carriage house, however, was still used and lived on for a bit longer.

Today, a parking lot sits where once stood the incredible Second Empire palace of Wilhelm Boeing, the childhood home of an aerospace giant - and one of Detroit's native sons. 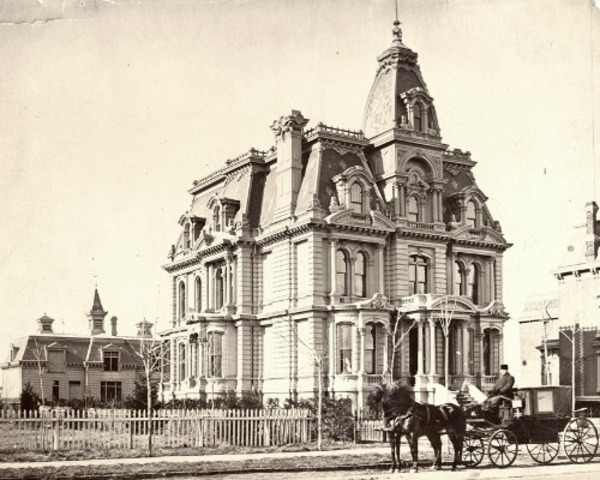