The cost for construction and all equipment and outfitting was $16,179 (about $484,000 today, when adjusted for inflation). It was designed by architect William "Buck" Stratton of the firm Stratton & Baldwin and erected by W.G. Vinton & Co. It had more than 100 bathrooms - 57 for men and boys and 44 for women and girls. There was also a locker room with accommodations for 30 people and a "hook room" that was free for all and where 100 more were provided with dressing facilities.

Perhaps what seems odd today, the bath house rented out bathing suits for free, too. The bath house had 1,630 suits available - 1,438 for men, but only 192 for women.

The bath house was free to use, but there was a charge of 10 cents for use of a dressing room and 5 cents for a locker.

By the early 1900s, overcrowding saw more dressing rooms added, and the facility offered 120 rooms for men and 48 for women, as there were now more than 50,000 people using the facility each season. Detroit's population was exploding -- and they were looking for a place to bathe. There was an increase of 12,078 more people using the bath house from 1902 to 1903, and then just three years later, an increase of 33,780 over that period, when 1906 saw 84,917 bathers.

Deemed inadequate for the bathing masses descending on the park, a larger bath house was proposed, and in 1907, $70,000 was appropriated.

This second bath house opened in early July 1909 as the second largest such structure in the country. It featured 800 dressing rooms and could handle 20,000 people a day.

The old bath house stuck around, however, and was even drafted back into service to handle overcrowding at the new one. It was used as "the Infants' Rest" for a number of years following the opening of the new bath house. 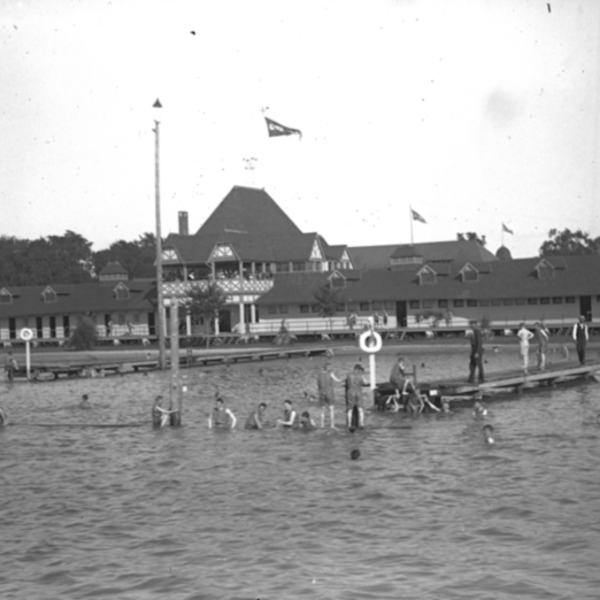