What's with the unusual name? Well, the Annex Theatre was built just down Grand River Avenue from the Grand Riviera Theatre to serve as an overflow theater of sorts.

Like its parent theater, the Annex was an atmospheric theater designed by architect John Eberson. This scaled down theater borrowed the Riviera's style, putting the audience in a simulated garden "with twinkling electric stars and moving white clouds projected on the dark blue ceiling," according to "Opera House, Nickel Show and Palace" by architecture historian Andrew Craig Morrison. "The sides of the auditorium were designed as building facades and garden walls, with windows lighted from within, and artificial trees and vines as adornment. White doves were suspended from the ceiling as if in flight. The house lights dimmed for the show in an imitation sunset."

The Annex opened Feb. 4, 1927. The theater sat 1,824 people and cost about $560,000 to build, about $9.4 million in 2022 dollars. Unlike its big brother, the Annex did not have a balcony. This was the only known design by the Eberson firm like this, according to Detroit theater historian John Lauter.

But the crowds started to dwindle. The Annex tried to pull in theatergoers with giveaways, such as "free giant size 5 cent package of Hopalong Cassidy Bubble Gum for every child attending Saturday special featured matinee" in 1950.

When its owners decided to consolidate their dwindling crowds in the Grand Riviera. Ads for the Annex disappeared between Sept. 23 and Oct. 7, 1950. On Jan. 2, 1952, it was announced that United Theaters Corp.'s lease on the Annex was canceled in order to tear the theater down and turn the site into a parking lot. It was demolished in 1954.

Its Robert Morton theatre pipe organ was removed just prior to demolition and saw service in a Minneapolis church for years, and was just removed from that building in more recent years, according to Lauter.

A nondescript beauty school sits on the site today. 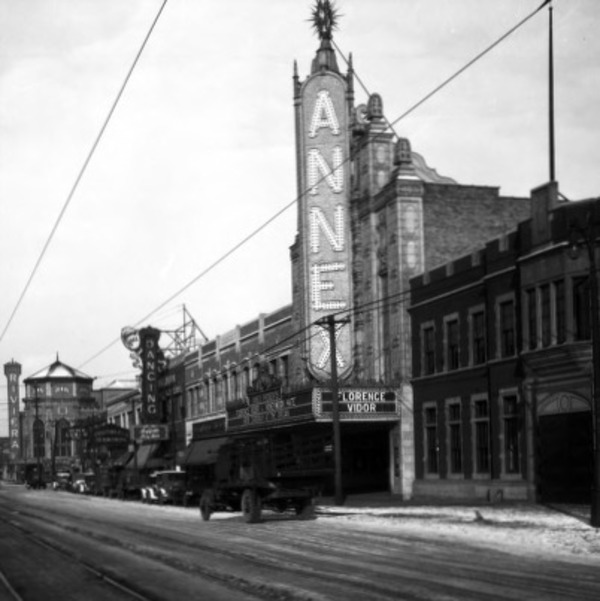